The effect of pollution on fertility

When we talk about the environment, climate change is top of the agenda. It eclipses all other topics, but there are other environmental problems impacting us right now.

One of those problems is chemical pollution. Man-made chemical pollutants in the environment encompasses more than just poisoned water and dirty air. It also includes legacy chemicals, sometimes called forever chemicals, which were banned years ago but continue to impact us negatively.

One chemical class are PCBs (polychlorinated biphenyls), which were used in cooling/heat-transfer fluids in electrical apparatus. These were originally banned in most countries in the 1980s. Since then, it is estimated that 370,000 tons persist in the environment globally. A further 780,000 tons persist in landfills, dumps and storage.

The health problems created by PCBs are related to general toxicity, particularly in the liver, neurotoxicity and endocrine disruption. The last one presents a challenge to human fertility.

The culprit: structure of a type of PCB

PCBs interfere with hormones in the body. They have been shown to both inhibit and imitate estradiol, the main sex hormone in females.

We are now seeing the same effects of these chemicals on other species in parallel with the problem in humans. Scientists investigating PCB presence in marine life have found they can have a substantial impact on the reproductive health of species including porpoises.

A UK research team found that PCBs are associated with reduced testes weights in otherwise healthy porpoises. The research team were from:

The researchers said, “The population studied have pregnancy rates that are less than half of those observed in other less contaminated populations. We believe the impacts of PCB exposure on male fertility offer a partial explanation as to why rates in this population are so low.”

The scientists warn that this adds to the knowledge that humans are also at risk of contamination and subsequent reproductive issues. The researchers also commented, “The results are in agreement with studies on other mammals that have shown that PCB exposure inhibits the male reproductive system. For example, human epidemiological studies have found negative associations between PCB exposure, sperm motility and circulating testosterone levels in men. There is a growing consensus that exposure to contaminants that disrupt hormonal systems may be partially responsible for the global decline in male fertility rates that has occurred over the last 50 years. Therefore, it is imperative that more is done to protect humans and our environment from exposure to these dangerous chemicals.”

Although we are stuck with these forever chemicals there are certain things that we can do to avoid exposure to high levels of PCBs. We can also mitigate the effects of a low level of exposure. Clearly you should avoid obvious sources such as old electrical equipment, contaminated industrial ground/waste sites, untreated water from dubious sources etc. To mitigate the effects of the kind of low-level of exposure that most people experience some studies have shown that dietary fibre can reduce PCB levels in the body. High contents of dietary fibre are found in food items such as vegetables, fruits, seaweed, rice, nuts, and pulses. Another very good reason to kick off the New Year with a healthy diet! 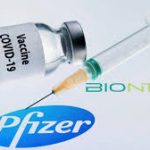 COVID-19 vaccine and fertility treatmenthealthcare, News
We use cookies to ensure that we give you the best experience on our website. If you continue to use this site we will assume that you are happy with it.Ok